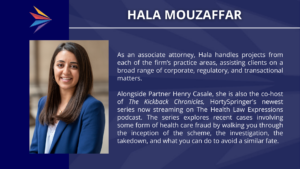 Last year the federal government recovered nearly $5.6 billion in settlements and judgments involving false and fraudulent claims. Of that total, $1.9 billion came directly from the health care industry. In many of the cases that make up that egregious number, individuals were forced to learn the hard way that because of the unique laws that regulate healthcare, what may be a legitimate business opportunity in other sectors of the economy, can be a crime if health care is involved.

One of the best ways to avoid falling victim to this often confusing web of laws is to examine the cases of those that have already been the unfortunate target of a government investigation. Join partner, Henry Casale, and associate, Hala Mouzaffar on their biweekly podcast “The Kickback Chronicles,” as they explore a recent case involving some form of health care fraud by walking you through the inception of the scheme, the investigation, the takedown, and what you can do to avoid a similar fate.

The most recent episodes of The Kickback Chronicles are now available for your listening pleasure:

Episode 1 – Learn from the Misfortune of Others
The inaugural episode examines the background of several health care related fraud statutes and how they come into play in a case involving claims submitted by a portable x-ray company for patients that were already dead.

Episode 2 – Teen Substance Use Disorder Facility Fraud
This episode looks at the takedown of a group of California individuals that exploited a state Medicaid program for teens with substance use disorders.

Episode 3 – Brace Yourself for Fraud
This episode takes a closer look at a kickback scheme between orthotic brace companies and marketing agencies disguised as marketing contracts.

Episode 4 – Fraud is in Their Genes
This episode investigates a kickback scheme for unnecessary genetic testing that was cut short before it blossomed into something even bigger at the onset of COVID-19.

Episode 5 – Proof of Vaccination Required
This episode focuses in on the government’s crackdown of COVID-19 related fraud by looking at not one, but two separate cases involving fraudulent COVID-19 vaccination cards.

Episode 6 – To Catch a Fraudster
This episode analyzes the extent of the government’s resources and tactics during an investigation using the recent conviction of a home health agent for fraudulent billing as a case study.